This is Demand Driven SCM – Part 2

In Part One of this four-parter we ascertained that demand-driven alignment is essential to break the service paradox. Although thoughtfully chosen targets and KPIs play an important role in this, they have limited scope. Luckily, there is another factor that you can influence, namely the ‘moment of decision’. In Part Two of this four-parter we will explore the link between the right moment of decision and demand-driven alignment. 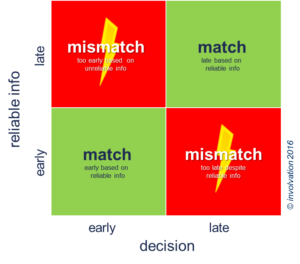 Late if necessary, early if possible!

The moment of decision is the precise point in time that you make a particular choice. This can be ‘early’, i.e. a long time before the decision will take effect, or ‘late’, e.g. at the last minute. Preferably, we should make the decision early if the information is reliable at an early stage, and late if it doesn’t become reliable until later. This is not always the case in practice, however, which creates a ‘planning mismatch’.

The decision matrix shows that there are two variants of this planning mismatch:

In the first variant of the planning mismatch, decision-makers will understandably often be motivated by self-interest and attempt to mitigate their own risks first. For example, when attempting to be efficient and reliable in the face of variable demand and unreliable forecasts, a production manager will tend to issue longer lead times and plan the capacity conservatively. Meanwhile, to avoid shortfalls, Sales will exaggerate the forecast slightly, and an inventory planner will tend to reorder a little sooner and a little more than necessary.

Some common examples of deciding too early include a manufacturer who has to plan his capacity and an inventory planner who has to place orders based on an unreliable forecast.

All in all, the first variant of the planning mismatch is a far-from-ideal situation in which alignment is nowhere to be seen. Plans have changed before the ink is even dry, and ad-hoc remedies are almost standard practice rather than an exception. The consequences are obvious: long and unreliable lead times despite high costs, and/or out-of-stock situations despite high inventory levels, a whole load of hassle and – not unusually – finger-pointing and mutual distrust.

In the second variant of the planning mismatch, the decision-makers themselves fail to utilize reliable information that is available at an early stage in order to make early, ‘riskless’ decisions.

Some examples of the second variant include failure to provide suppliers with early volume certainty by guaranteeing order levels and, in the case of dependency on a particular production sequence, failure to formalize the production schedule in advance using so-called ‘rhythm wheels’.

Likewise, the second variant of the planning mismatch is far from ideal. It is of course a great shame to fail to capitalize on the efficiency potential of early riskless decisions, such as the rhythm wheel mentioned above, for example. However, this becomes even more regrettable when one considers that an early riskless decision could potentially give other partners sufficient early certainty to make the right decision, such as in the above-mentioned guaranteed order levels. Hence deciding too late – or, to put it more accurately, failure to decide early and provide certainty – by one partner can result in another partner having to decide too early. So the second variant of the planning mismatch appears to cause the first one!

Planning mismatch is a recipe for disaster

So if you are caught up in the planning mismatch, you now know what you need to work on going forward. If you are wondering whether there is a planning mismatch in your process, or actually in your supply chain, you can find the answer by looking at whether important decisions are being made when the information is still unreliable, and/or whether important decisions are being delayed instead of making use of the available information. If the answer is yes, then you will undoubtedly recognize the symptoms described above. So you have some work to do – but the question is, how?

Now we’ve learnt what the planning mismatch is and how important it is to escape it, in Part Three of this four-parter we will examine which steps to take to do so.

This brings us to the end of Part Two of our four-parter on Demand Driven Supply Chain Management. If you would like to know more, feel free to contact Alex Tjalsma: a.tjalsma@involvation.com